The universe hates me

I don't put a ton of stock in the accuracy of horoscopes, but they're fun and sometimes eerily accurate so I pay attention. Mine's posted on my Google homepage, and I read it about 3-5 times a week. I checked it today and it was this: 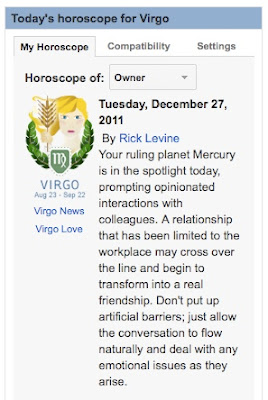 For those of you who don't know, I have a job that doesn't allow me to socialize with my coworkers. At least I'm not supposed to; there are some people I've known since before we worked together and I do kick it with them. But otherwise, fraternizing is no bueno. And there's this horoscope, which is kind of hilarious given the fact that I've spent a million hours with my boss and our other team member this month and we're all creepily close right now. Like, know when the other is hungry or say the same thing at the same time. But otherwise, we have very little in common and are probably on the verge of getting really sick of each other. It's rare to spend 40 hours a week with people and feel the need to see them outside of work, too.

So, thanks, horoscope, for making it weird. Because more weird in my life is exactly what I need.
Posted by Adrienne Saia at 11:39 PM