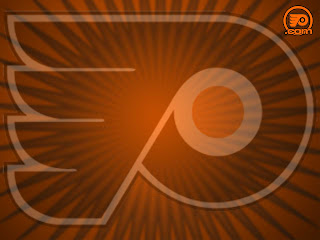 The Flyers have defeated both of last year's Stanley Cup finalists, and they've done so with force. The Bullies seem to be skating faster throughout all three periods than they have in seasons past. Hopefully, they can maintain this momentum through a long, cold season.

Watching your hometown team on the hometown network's broadcast is a fantastic way to beat any homesickness. For the first time, I'm lauding Comcast for their free trial of NHL Center Ice which is showing the Philly Comcast Sportsnet feed. It's been a blast listening to Jim Jackson call this early season game and Philly home opener.

I feel like Prongs, Kimmo Timmonen and Jaromir Jagr must tell some pretty good bar stories. I wonder if they've been around long enough that old rivalries don't matter and they just share war stories. This is what I want to believe is true and I envision them sitting around the ice bath, throwing back Lagers and reminiscing about strip clubs in Toronto.

Bryzgalov has Benjamin Franklin on his mask. That is badass.

I'm not comfortable when Coutourier's on the ice.

It's a beautiful thing when players rocking in real life also rock for your fantasy team (Pronger, Voracek, Bryzgalov).

The Flyers need to separate themselves from the Eagles and stop taking boneheaded penalties.

This season is going to be epic. It needs to be.
Posted by Adrienne Saia at 8:01 PM