I love it when professionals in the world of sports show love for their teams (except for when Skip Bayless talks about the Cowboys, because no decent human being in America outside of Texas should ever talk about the Cowboys in a positive light because they are evil incarnate. Texans don't know any better; that's why we keep them confined in the flat, hot, hellish land at the bottom of the nation). 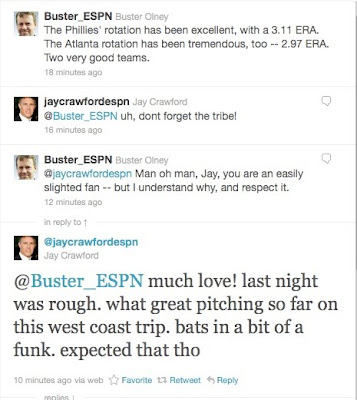 I hear ya about bats being in a funk... but we're just lulling Atlanta into a state of false confidence. The slogan "I got 99 problems but a pitch ain't one" is ringing painfully true for America's greatest team from the birthplace of freedom.

In fantasy, however, "Bury Me At Utley's Wounded Knee" is faring a bit better (thanks, Joey Votto). I'm holding 6th/12 with a killer line-up for the weekend. Since my hockey season came to a disgraceful end (both in fantasy and in real life with the Flyers' spectacular fall from grace), expect me to be knee-deep in destroying the teams in not one, but two, fantasy baseball leagues.

Sorry, employer. I'm going to be a lot less productive now.
Posted by Adrienne Saia at 8:26 AM