In the wake of yesterday's veritable snuff film of a sports choke that was the Master's, Sports Illustrated released their photo-list of the 23 Most Memorable Sports Collapses. I'm proud to reveal that a Philadelphia sports team factors prominently into four such moments on this list.

Why would anyone be proud of their sports team being involved in this?

Well, because contrary to the popular belief (and the schadenfreude that Philly fans have bemoaned for years), we were the victim of only one such collapse. For the other three in which we factored, the Philly team caused the collapse. 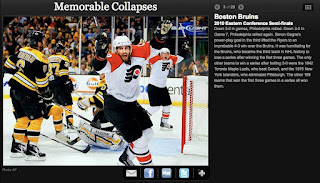