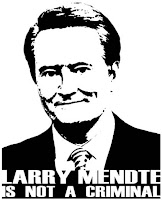 This is a good, ol' fashioned, Adrienne Saia-style rant.

First, you need some background: Larry Mendte. Google him.

I'll start by saying that through the entire scandal and immediately afterward, I didn't have a problem with the guy. He let his whopping, local news anchor ego get the best of him and he fucked up. Big time. Like, federal investigation big time. Mostly, I felt bad for his wife who stood by him through this entire embarrassing, non-sex scandal. I had met Alycia Lane and was immediately put off by her and her entourage, so I had no problem believing that she was as much of the problem as he. The guy pleaded guilty, went away for a while, wrote a few blogs here and there – that was about it.

Then he drops this gem for Philadelphia magazine. (Go on, read it.)

This is the most self-aggrandizing piece of MySpace diary bullshit I've read in a long time. Whatever respect I had for Mendte was wiped out here; while he previously took the high road of admitting guilt and taking responsibility for his actions, he's now resorted to calling out people who have supposedly turned their backs. When you become a subject of news (by your own actions, no less), then members of the media need to talk about you. Period. You know how to avoid that? Stay out of trouble (and other people's email accounts).

After his federal indictment, guilty plea and subsequent house arrest, Mendte embarked on several cricket-filled pitch meetings with A-list executives. Many didn't go well and he was out of work for quite some time. But then he won Powerball!!! And then one of his pitches got picked up!!! And, in the meantime, he had job offers in excess of what my mom has made over the past 10 years!! But it was weally, weally hard guys. He had to tap into his savings to make ends meet.

Honestly, this is worth a fucking, (probably) paid magazine editorial? What about focusing on those who've also busted ass to create their professional lives and haven't broken federal laws in the meantime? How about focusing on people who struggle to make ends meet every day without having a combined annual income of $1 million plus? What about the millions who haven't fucked up and STILL don't have jobs that put their work in millions of homes every night? Mendte's "post-it" story isn't worth publication; it isn't even worth a five-line brief. It's the diary entry of a whiny sycophant whose own failures as a citizen brought him into the "it" that "destroyed" his life and a self-indulgent paean to the dumb luck of a Powerball ticket that pulled him through.

It's not that I don't believe that Mendte deserves success; he spent decades as an Emmy Award-winning newscaster and anchor. He undoubtedly used his talents and screen time to make the contacts who helped him during his "post-it" time. But when admitted ex-cons like him and Michael Vick (whose crimes literally made me vomit, who is a reprehensible creature, who unlike Mendte, destroyed the life of another living thing, who is the subject of an entirely separate rant that I'm not ready to unleash) whine about the difficulties of life after their indiscretions, it makes me sick. There are good people who, on the daily, of no fault of their own, are embroiled in years-long stages of "post-it" that never come to the fortuitous end that Mendte's did. And they don't get the space in Philly Mag to whine about it.

I'm no internet troll, and I'm no jealous hater. But Larry – stick to the reporting and commenting on the news and stop trying to make your story a part of it. Your "post-it" is not a success story, it's a slap in the face to those whose lives haven't been so lucky.

Photo courtesy of the awesome-sauce Paul Triggiani.
Posted by Adrienne Saia at 8:46 AM