How I Feel About the Super Bowl 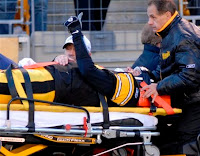 I love sports. Love them. I even dragged my ass out of bed early (albeit, to a bar with an unlimited bloody mary bar) to watch the World Cup last year. I cheer for all the Philly teams (yes, even the Sixers), Penn State and sometimes the University of Colorado just to know what futility feels like. But I am entirely underwhelmed by today's Super Bowl. I wrote the following in an email to Pajiba and am reprinting it here so you can understand my state of mind:

In other news, it is Super Bowl Sunday. This is good because I like beer and onion dips. However, since the Packers beat my Eagles and I generally hate the Steelers (and date rape), the only hopeful conclusion to today's gridiron battle is that the ground beneath Cowboys Stadium opens up and swallows everyone into the abyss.

This scenario would also destroy the $100 million monstrosity that is the home field of the most hated team in the NFL (according to Philadelphia, the only city that really matters because we were the birthplace of freedom, you ungrateful bastards. Shut up, Boston). The only people who should make it out alive are those four old guys from the Visa commercial who have gone to every Super Bowl since Jesus (editor's note: oops, almost). That, in itself, is impressive.

Hope everyone has a fun Super Bowl Sunday (except for This Kid Dan Geneczko, I hope you end up sobbing into your terrible towel). And happy birthday, Ross!
Posted by Adrienne Saia at 10:54 AM