Wow, it's been a while. I'm working now, in retail, and the hours are kind of nuts as retail hours usually are. However, the last two weeks have brought about a number of fortuitous scheduling coincidences that have facilitated a damn good time.

1) I had off last Thursday, my 27th birthday. Yes, I'm 27. It's weird. I kind of feel old, but I think that's because I live near a college town and work with youngin's too. Well, I took that day off to act like I was turning 21 and it was kind of awesome to get wild with it. Friday at work? Not so fun. But Saturday off, some cheesecake courtesy of Miss Jordan WB, was also perfect.

2) I have off this Thursday as well. THE PHILLIES ARE IN TOWN THIS THURSDAY!!! They're here to play a make up game fom the May series during which it a) kinda snowed and b) I had food poisoning or the stomach flu. I went to the opening game but felt like hell the next day and couldn't go. Thankfully, the game was sleeted out (hooray for Colorado weather). So now, they're back and I'm going. The Phils are 3-0 when I attend their Colorado road games, so I hope I can keep my streak going. Either that or I'm gonna pull a Dee from Always Sunny and run on the field and kiss Jayson Werth.

I'm loving this week.
Posted by Adrienne Saia at 1:02 PM No comments:

On the upside, I feel better about myself

Alright... let's be honest, this bitch is just looking (searching, hoping, grasping at straws) for a record deal. I mean, no woman whose headshot has her posing in a CBGB's tank with a cat can really think she'd score a guy, right? Gah. Whatever, she sat in Dallas and figured out her publicity stunt and now me and 23,000+ other suckers are watching her act it out.

At least I'm feeling better about myself today. I never wrote a song about marriage and uploaded it to YouTube. So, thanks for the boost of self-esteem, Lisa.

Posted by Adrienne Saia at 10:25 AM No comments:

I'm a pretty stressed out over some petty things and some pretty big things and wasn't sure where to start in terms of sorting them out in my head. I thought about writing but am still toeing that line between what's mine to tell and what's not. I'm terrified that one of my friends might not make it through the year. I've started a job (yay) but there's no sign of health insurance benefits coming with it. I can't sleep. I need to start running again. I miss my friends.

These are all self-involved "I" sentences. I hate that.

At the end of the day (i.e. NOW) – I have a roof over my head that's paid for until at least Sept. 1, I have people who love me unconditionally, I'm healthy as I've ever been and I wake up to sunshine every day in one of the most beautiful places in the country.

These are "I" statements that I'm okay with.

And sometimes, if I pay attention, I capture moments like this: 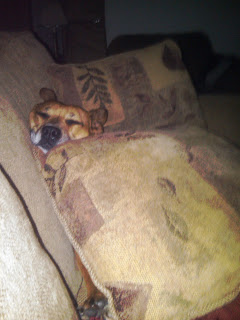 Posted by Adrienne Saia at 11:20 PM No comments:

Back in June I was contacted by Dustin from Pajiba asking if I'd like to take a recapping gig with them. Being a huge fan of the site and an attention whore, I said yes. I'm covering the AMC show Rubicon; it premiered (technically) last night and you can find my ranty-ass recap of episode 2 here. I was really excited about the show when I caught the sneak preview back in June, but now I'm not so sure I'm going to survive the season. It's throwing out poignant, yet meaningless sentences and is loaded with coding montages and ominous music. I need more.

What I need less of is commenters. Actually, not fewer commenters, because at least they're reading my stuff, but I need less curiosity and need to stop reading the comments. My frustration with the site's commenters was what piqued Dustin's interest in the first place. Some are interesting and conversational, but a good chunk are downright mean. I've already been called a loser this week, which I think inducts me into the club of Pajibans (there might be more hazing if I ever actually make it back to Philly and meet Stacey, however).

Anyway, I make it a rule (which is occasionally broken) to not read the comments on any of my pieces outside of here (because here I have total moderation control and can delete your ass because I can). I had some great conversations with people on Randomn3ss but had some libelous stuff posted about me that was entirely unfounded. That's where my idealistic love affair with open discourse ended. I decided when I started interning to not respond to comments. The responses on Backpacker.com were generally informative or supportive, as the outdoor community seems to be. When I interned at the Tribune in Greeley... not so much. The comments were generally xenophobic, racist and - this does NOT reflect all Weld County residents, obviously - often just ignorant as fuck. It was sad, really, that discourse on the news boiled down to that level. But that's what happens in an open forum: the trolls who aren't given the soapbox in real life come out of the wood work and all hell breaks loose.

So since this is my site, I can allow or not allow commenters as I please, which is kinda awesome. At least it keeps me sane and self-confident. And in the future, I should stick to checking the comment numbers but not read the comments themselves. Of course I then run the risk of missing a comment about a grammatical issue or factual inaccuracy (which would bother me - I generally like my stuff to be accurate). But it might be worth it. I'm guessing that the writers of Rubicon might stay away from the internet commenters, because I definitely ripped them on this episode. Ignorance is bliss for the creators of media.
Posted by Adrienne Saia at 11:53 AM No comments: