For all of my World Cup apathy, I must admit I'm excited about the match up between the U.S. and England today. It's not so much because of the sport, but because it elicits a really strong memory of a very cool time in my life.

I was 14 when I participated in a US/UK exchange program. Kirsty came over first, for two weeks, and bought jeans and Maybelline mascara (the dollar was super weak compared to the pound at the time). I went over after school ended for two weeks and it was during the 1998 World Cup. It was in France, I believe, and the UK did quite well. The whole Brady family was into soccer and so was I (I was still playing at the time). One of my first purchases (in addition to about 5 pair of cool Adidas wind/snap pants... those were so all the rage and, just like today, Adidas's international lines are way more colorful and interesting than what we have in the U.S.) was a red 3 Lions jersey. Kirsty was totally incredulous at the time and thought I was a spoiled American. I had no idea why until two days later when I did the conversion in my head. The jersey was well over $100. Sorry mom.

I don't remember who played or who won, but I remember the barrage of fight songs that were popular at the time. "Three Lions" was a big one, popular with the boys in our group, but it was a little slow for me. My favorite fight song was "Vindaloo" by Fat Les. The chorus was so damn catchy (in the vein of "Ole ole ole... ole. Ole."). I even bought the CD single (photographic evidence below) but cannot for the life of me find the actual CD. 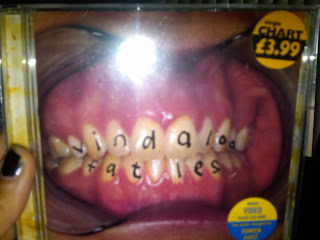 Again I sing the praises of YouTube; I found the video for "Vindaloo." I love how it glosses over the cultural assimilation element (curry vindaloo... yeah) in favor of nationalism. Whatever, the song rocks. And it makes fun of The Verve. For those of you watching the match today, start this video and turn up your speakers