It's a bad time to be a Russian Studies major

I read news for at least one hour per day. Since I'm unemployed, I read it pretty much all day (although today I ran to the Humane Society, volunteered there, and then ran/walked home... back off, it was 900 degrees here and I got tired).

Anyway, I read that 10 people back East were arrested under suspicion of being spies for Russia's S.V.R. (foreign intelligence service), or, the modern K.G.B.

People from Russia are still spying on the U.S.? Did 1988 suddenly come back? I don't understand why. I don't mean to sound naive – I understand why some governments would want to spy on others. But what sort of intelligence info do Medvedev and Russia have to gain by spending hundreds of thousands of dollars on randoms who don't even work in government positions? Okay, at least at this point, the media's not telling us where they work, but I'm pretty sure that the government's not doing a whole lot of espionage work in Yonkers. Northern Virginia, possibly, yes. Montclair, N.J.? Not so much.

Being me, I naturally had to wonder how this would affect me. I'm applying for government jobs and, having majored in Russian Studies (along with History) at Hamilton College, I'm hoping it serves more of a help than a hindrance. To all you federal government people who might want to hire me: I promise to never spy for the Russians. I do not promise to renounce my weird, head of state crush on Vladimir Putin. But, let's be honest, what red-blooded American woman could resist this?: 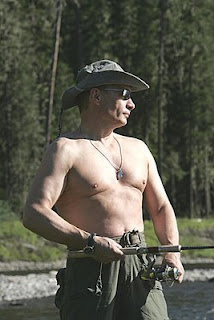 I think it's weird that we're not dealing with spies from a Middle Eastern country or possibly China, but are still dealing with the fallout from the Cold War. I've been to Russia a few times and it doesn't seem to be a hotbed of anti-American sentiment. I was there when the Iraq War started and we did all pretend to be Canadian for a couple days, just in case. I think there's a lot of behind-the-scenes, government-only stuff going on here that the general American public isn't exposed to. In a way, I'm okay with that; I don't need more fear-mongering in my life than what the MSM's already giving me. But this story's not over. I'm hoping that the American MSM comes through and gives us more info, and that the government allows some access to relevant information. There's got to be a deeper reason behind this sudden discovery of Russian spies in the U.S. and to their purposes for still being employed by the S.V.R.