On my flight home from Austin I sat next to three guys - all under 35 - who either owned or were founding members of a company. I have no idea what exactly they did, but they were talking about netting at least $1m by August. Even if they were full of it, I figured I could learn something from eavesdropping. Or at least be entertained for the duration of the flight.

The one who seemed to be the "CEO/founder" figure also served the position of "loudest person on the plane," so I ended up listening to most of his stories (one of which involved a psychotic intern, at which I accidentally laughed aloud). He was giving advice to a younger employee whose wife had just given birth to their second child. The younger employee was worried about financial planning; he had tried discussing it with his wife several years ago and it stressed her out. I get that - sometimes I just don't feel like dealing with the big-time shit that comes with living an adult life.

But at some point, you've got to deal with it. The "CEO" gave his friend the advice to sit down and suggest to his wife that they each write down life goals (in this case, ones dealing with finance) and then compare. He said - with an astounding amount of confidence, bordering on arrogance - that he had no doubt that if the man and his wife made a list of goals, that he would have enough saved for his kids' college funds in five years.

Okay, the guy's also probably clearing at least $100k per year, judging by the watches, talks of flight lessons and equity meetings occurring next to me (however, we were all flying Southwest... so they're either not loaded or simply like checking their bags for free). But it was that confidence/arrogance with which this guy arrived at the conclusion that made me consider making the list I made today. I decided to focus on daily goals. They're not quite long term, but all things I need to consider in the two months before my lease is up.

I've posted the list on my front door so that it will bother me every time I leave my apartment. It's a start and I'm hoping it'll help me keep my eyes on the prize (the "prize" being a job with health insurance that's actually - finally - in my field). But I need to remember to constantly hone my skills as a writer, keep this blog moving (especially on the days when I feel like I have zero to say) and to keep my dog and I in shape. 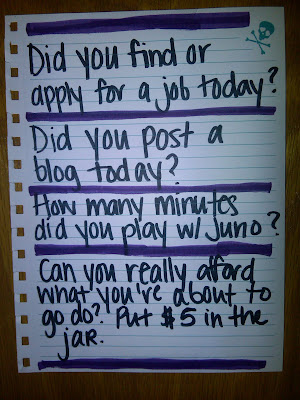 I'm thinking it's a good start and might keep my mind organized and focused. And I think I'm going to hold on to the concept, keeping the goals fresh and changing them as my life changes. God knows there's going to be plenty of that coming up.
Posted by Adrienne Saia at 11:00 AM